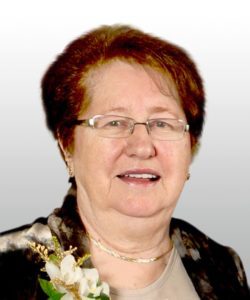 It is with deep sadness that we announce the death of Yolande Hébert Brault. She was 87 years old. She left to join the great love of her life the late Guy Brault (April 2016). She died at the Lakeshore General Hospital after succumbing to pneumonia (covid).

Curious, perfectionist, skilful with all sewing and knitting work, she was passionate about genealogy and Quebec history. She was proud of her family, she was attached to her native village of Sainte-Martine for the spirit of mutual aid and camaraderie that reigns there.

She is survived by her daughter Nathalie Brault (François Touchette), her granddaughters Marjorie Touchette (David Vincent) and Sandrine Touchette, her sisters-in-law Thérèse Brault and Agathe Brault, brother-in-law Lucien Brault (Rita Savard), her many nephews and nieces as well as other relatives and friends.

The family seek condolences, in the parish church of Ste-Martine, on Saturday, August 29, from 10 a.m., followed by a funeral at 11 a.m., under the direction of:

In lieu of flowers, your expressions of sympathy can be expressed by a donation to the Gisèle-Faubert Foundation.